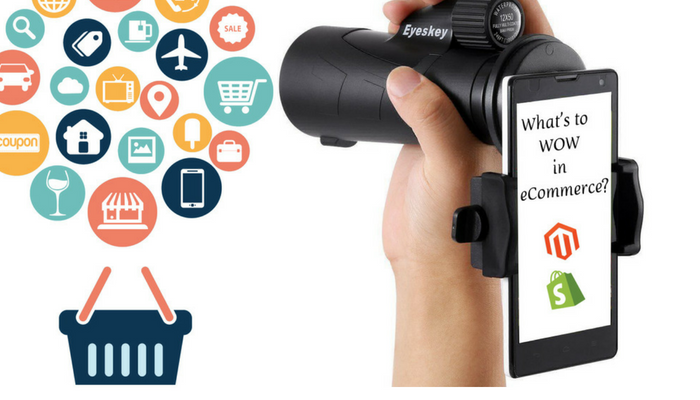 Of course, when it comes to eCommerce, there is something to WOW!
It was in the 90’s when the concept of eCommerce was out and now, it’s been over 2 decades. Ecommerce has gone beyond “buying and selling something on the website” to the multiple interactions that depend on technology to the movement of goods from one place to another.
Another factor to look upon is the use of Mobile and mobile internet usage. You must be thinking what’s in it for the mobile and mobile internet usage here in eCommerce? Let me explain this factor so that you can understand my point.

A statistic says that 51.2% (globally) of traffic is on the mobile internet out of the total web traffic and surprisingly, Asia continent has a high of 65.15% mobile traffic out of the total web traffic in April 2018, in comparison to other regions. Also, by 2020, mobile phone users will be about 4.78 billions! This clearly states that mobiles usage and mobiles, of-course, have brought a new revolution in the eCommerce field. Now-a-days, digital/eCommerce influence is so immense that, it has become entirely impossible for storekeepers to survive unless they are present upfront to of their customers; moreover, retailers will have to fully integrate digital eCommerce to thrive.

So, isn’t this a thing to WOW, where our selection, choices, and desires are now being manipulated by our fingers? With this, I have something more to add. A study says that by 2021, Mobile eCommerce will raise and poised for future growth upto 72.9%! This was about mobile eCommerce and eCommerce, so why would social media stay away. Even they have played a significant role in the raising of the eCommerce field. Ads, promotion, have expanded the sales and promotion of the eCommerce. A recent study says that social media usage has a share of total mobile minutes in India is 25% of leading online markets.

This all sums upto my explanation that Mobile internet, mobile Apps, social media are the WOW factors for eCommerce. Tremendous hike and demand are seen eCommerce and its trends. Fashion, entertainment, travel, electronics, beauty, food, groceries, you name it, all are surrounded by eCommerce.
So, the point is who is behind eCommerce’s success? Is it the promotion, ads, manpower or is it something else…?

How Shopify and Magento bring the WOW!
Shopify:
With a vision of making commerce easier for everybody Shopify just came in as an “another option” to Microsoft commerce and Yahoo stores, which would be simple, fast, and visually pleasing. And yes, gradually, it is the invisible selling machine!
The benefits of having Shopify:
It lets you run and setup a digital store immediately, without any need of technical prowess
With a minimum subscription of $29, Shopify helps merchants to decide what to sell, which template design to choose on a store and domain name
After the store is setup, Shopify acts as a hub for tracking, shipping, sales, inventory, and marketing analysis.
It’s more beneficial to the small and midsized industries, where maintaining and tracking the store is quite easy
No middlemen charge for selling products online
Personal experience of connecting with the customers directly
It allows merchants to sell online and through other channels, the hubs like Facebook and Pinterest
24/7 support

Magento:
As it is said it is especially for the eCommerce. It is now an Adobe Company, Magento Commerce Cloud brings powerful new technology and agility to Adobe Experience Cloud, delivering a single, end-to-end platform for content creation, marketing, advertising, analytics, commerce, order management and business intelligence for B2B and B2C customers.
Benefits of having Magento:
Unlike WordPress, Magento is for eCommerce

Provides caching and retrieving of data and provides all the tools to succeed in eCommerce
With everything becoming “mobile oriented”, Magento eCommerce comes packed with mobile-friendly technology

After having introduced to, two of the most powerful eCommerce platforms, it is clear that they (Shopify and Magento) being in the market, eCommerce industry has a lot more to see and experience. With the changing trend and necessity, people are now switching to Shopify and Magento; just to get things done more swiftly and easily done.

So, if you wish to get your store setup in Shopify or Magento, contact Svaapta IT Ally Solutions. Svaapta provides deep routed solutions and services for Shopify and Magento. Contact us on WhatsApp 6351754414 or Skype us at sales.svaapta or email us at sales@svaapta-it-ally.com.

Next Post Which Is The Most Important Framework For Software Development?